Though relatively widespread across central and southern England, the kingfisher is somewhat elusive and is therefore rarely seen. Kingfishers are not limited to rivers and can be found on coasts and marshes. Though famous for perching on branches, the kingfisher can also hover just above the water before diving in for its prey.
Kingfishers breed in their first year, and pair-formation usually starts in February. If the male and the female have neighbouring territories, these may merge for the breeding season. Both birds excavate the nest burrow into the stone-free sandy soil of a low stream bank, usually about 0.5m from the top. The birds choose a vertical bank clear of vegetation, since this provides a reasonable degree of protection from predators. The Kingfisher nest tunnel is usually 60-90 cm long, and the 6 cm diameter is only a little wider than the bird. The nest chamber at the end has a slight depression to prevent eggs rolling out, but no material is brought to the nest. 2-3 broods are raised in quick succession, normally in the same nest.
The first clutch of 6-7 eggs is laid late in March or early in April. Both adults incubate the eggs, and the chicks hatch 19-21 days later. Each chick can eat 12-18 fish a day, and they are fed in rotation once a chick is fed, it moves to the back of the nest to digest its meal, causing the others to move forward. The chicks are normally ready to leave the nest when they are 24-25 days old, but if the fish supply is poor, they can take up to 37 days.  Once out of the nest, the young are fed for only four days before the adults drive them out of the territory and start the next brood. 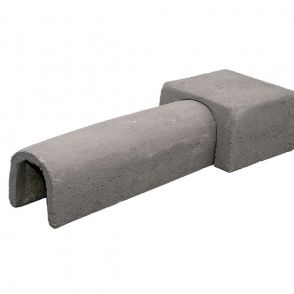 This Kingfisher tunnel should be positioned in a vertical bank beside a river or lake. The kingfisher nest box entrance must be at least 1 metre above the maximum water level
SKU: CJ-90072 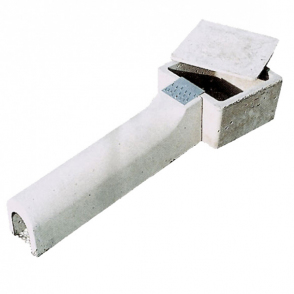 The Kingfisher and Sand Martin have lost many of their natural nesting sites on streams and rivers. This Nest Tunnel will provide and encourage a vital nesting opportunity where no suitable sites are available.
SKU: 640/0