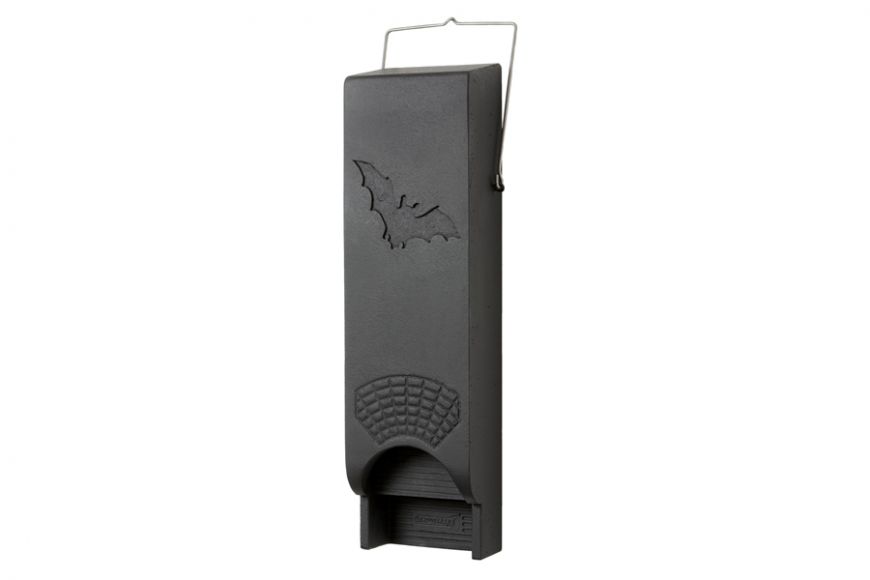 This Schwegler Bat Box is suitable for all bat species. Its semi circular back allows for installation on trees, posts or any flat surface.

The rear compartment of this schwegler 1FFH bat box is perfectly designed for larger species and is sufficiently large enough for female bat colonies and their young, as well as groups of common noctule bats. Ideally used as a bat roost site from spring to late autumn. Species inhabiting crevices, such as the Natterer's and Nathusius’ pipistrelle bat, can use the small cavities of the forward compartment as a safe daytime sleeping area. The narrow entrance hole provides sleeping bats with extra protection against predators and disturbances.

The Schwegler Universal Bat Box 1FFH can be installed on trees, masts, towers and flat surfaces. 4 supports have been built into the semi-circular rear surface to help ensure the bat box is stable in windy weather. The 1FFH bat box should be installed 3 to 5 metres above the ground. Always ensure a clear flight path to the 1FFH which will encourage the bats to inhabit it.

Both daytime sleeping areas feature clinging surfaces made of untreated wood and Schwegler Wood-concrete. The grooved design makes it possible for even younger, less adept animals to cling safely to the walls. Individuals can choose a sleeping area which offers them the best possible ambient climate whenever the weather changes.

The 1FFH universal bat box weighs 6kg and is a pallet delivered item. Manufactured from wood-concrete this bat box includes a galvanised steel hanger, it also comes with a schwegler 25 year guarantee.

Bats are protected by law but nevertheless all the different species are in serious danger of extinction. They have already disappeared from some locations. These animals provide proof that legal protection alone is not enough, wide-scale bat conservation projects are needed too.

Bats form the second largest group of mammals and are the only mammals capable of active flight. Their scientific name is chiroptera (i.e., flying hand). They can be found on every continent except the Antarctic and there are 900 different species worldwide. Throughout Europe there are 31 species.

In urban areas bats not only occupy the masonry of houses but will also settle in large, undisturbed roof spaces. One that is commonly found in houses is the Greater Mouse-eared Bat (Myotis myotis). Trees are the preferred habitat of the Bechstein`s Bat (Myotis bechsteinii). Woodland-dwelling bats include the Noctule (Nyctalus noctula).

Bats love warmth which is why their roosts generally face south. This is also why SCHWEGLER Bat Boxes are painted black to absorb heat. Ideal places to put up bat boxes include: open, sunny positions on woodland tracks, in clearings or where the wind has blown trees over, quiet tree-lined roads, large gardens, cemeteries and many other sites. Proximity to water such as ponds or streams is always advantageous. Because bats may suddenly decide to move to another location, it is best to hang up groups of 3 to 5 boxes close together. They should be hung at heights of between 3 and 6 m.

Do not renovate buildings which contain bat roosts (or clean out bat boxes) before the beginning of September; it is only then that most of them leave their summer quarters, and bats are much more sensitive to disturbance than birds. When cleaning out bat boxes, simply remove the droppings and do not use any sprays.

Bats have a vital role to play in the balance of nature. Apart from birds and spiders, they are among the most important insect predators. They leave their roosts to feed at twilight, and in this way birds and bats cleverly share their tasks: birds hunt for insect pests during the day, while bats take over at night.

Bats fulfil an important function in the biological control of insect pests since they need to eat a great deal.

Studies have shown that during the course of a summer each large bat will consume up to a kilo of insects, which amounts to half a million insects.

According to the Russian zoologist Korskof, a single Daubenton’s Bat (Myotis daubentonii) will consume approximately 60.000 mosquitoes between 15 May and 15 October. 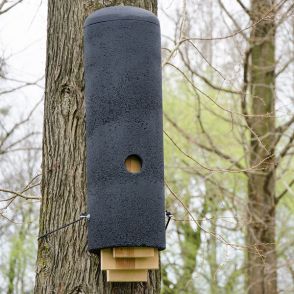 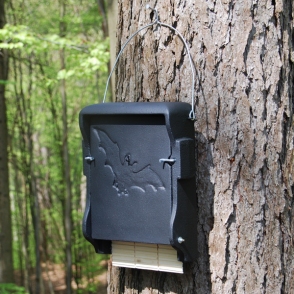 This Bat Box is big enough to allow colonial bats to use either as a roost or a nursery. No maintenance, Schwegler 25 year guarantee
SKU: 139/9